I play guitar. Playes years ago in my teen days, stopped playing and now picking it back up again. My guitars are Epiphone Dot, a Glarry Burning fire, and Epiphone DR100 acoustic guitar. My amps are a Kustom 8" bass amp, and a Behringer V-Ampire LX210 modeling amp. My pedals consist of a GNX4 Guitar Workstation, and a Bad Monkey Tube Screamer. I also have a M-Audio Fast Track Pro USB Audio Interface to interface with the computer. 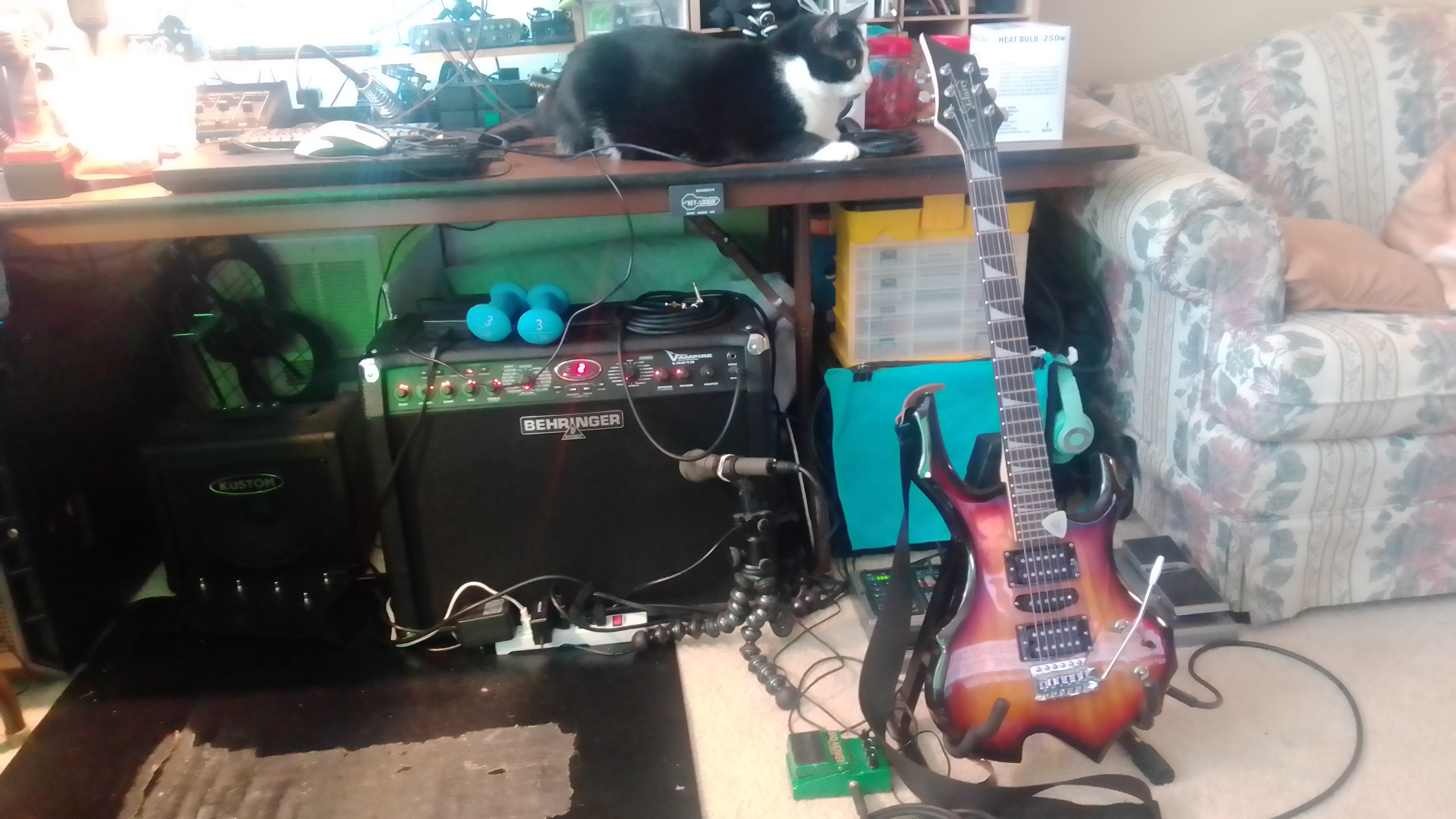 I decided to setup a recording set. I wanted to learn some keyboards, so I bought a Alesis V25 MIDI Controller. It was on sale on Amazon. I was going to get it from Guitar Center but it had to be delivered, and from prior purchases their 3-5 business days delivery usually turns into 2-3 weeks instead. Learned from that, if you I want something on sale from Guitar Center it better be in stock, or else look on Amazon. You have to be careful buying used equipment from Guitar Center too. I saw my Bad Monkey Tube Screamer used at a good price, went to buy it and they informed me it had a "waiting period" of 4 weeks before you can actually buy it, but it was just put on display. I had to put it in layaway and wait four weeks. 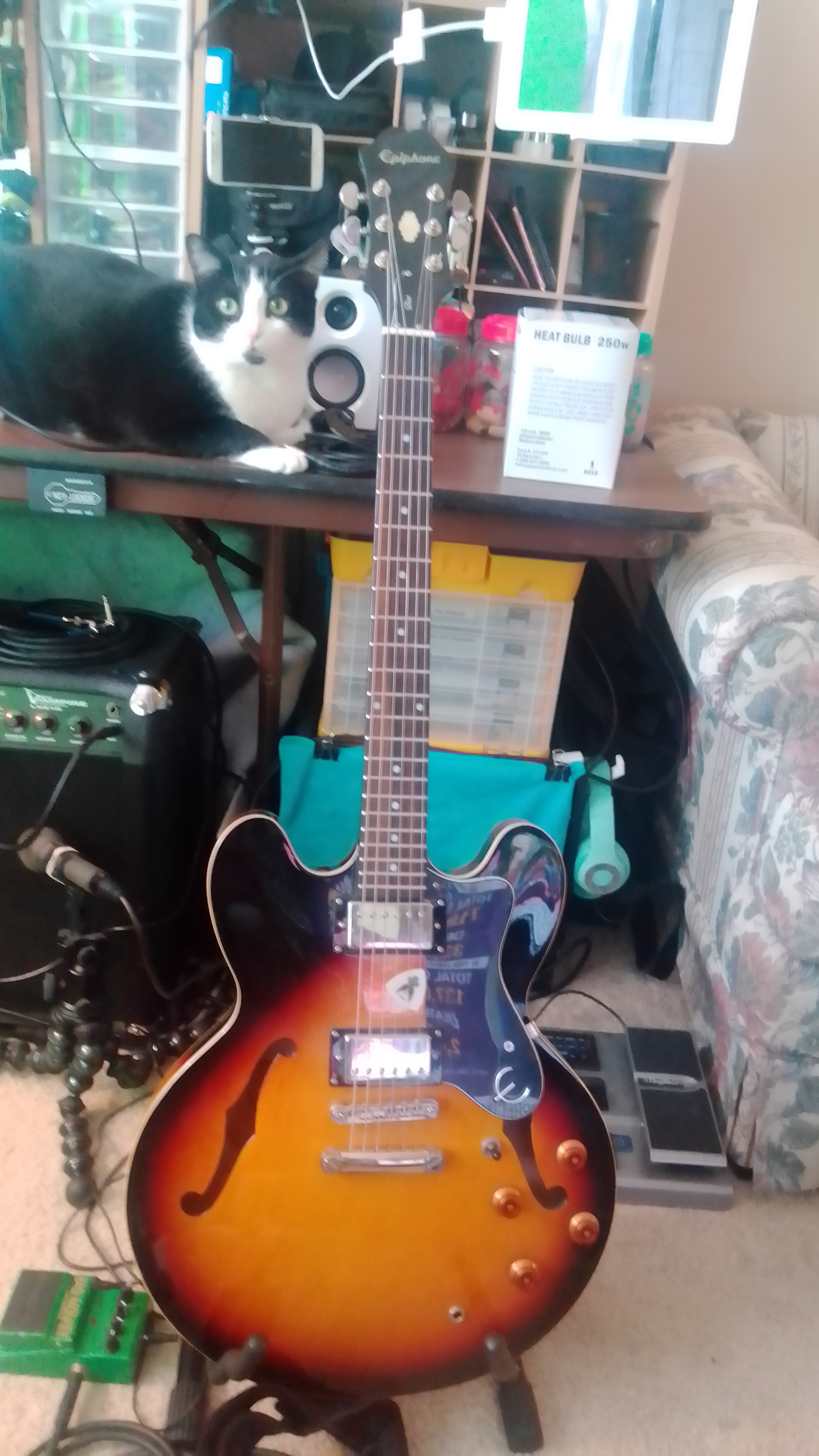 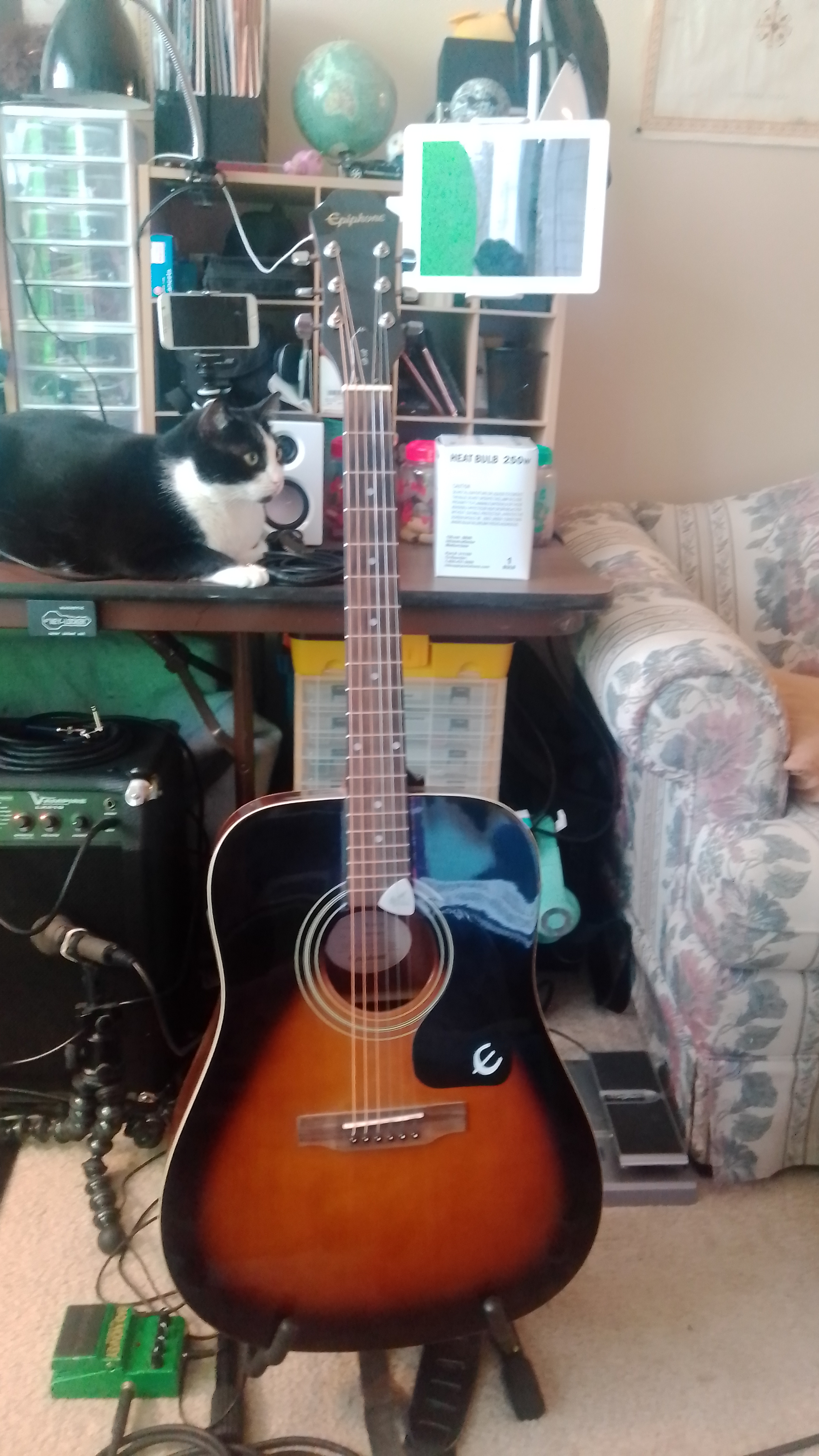 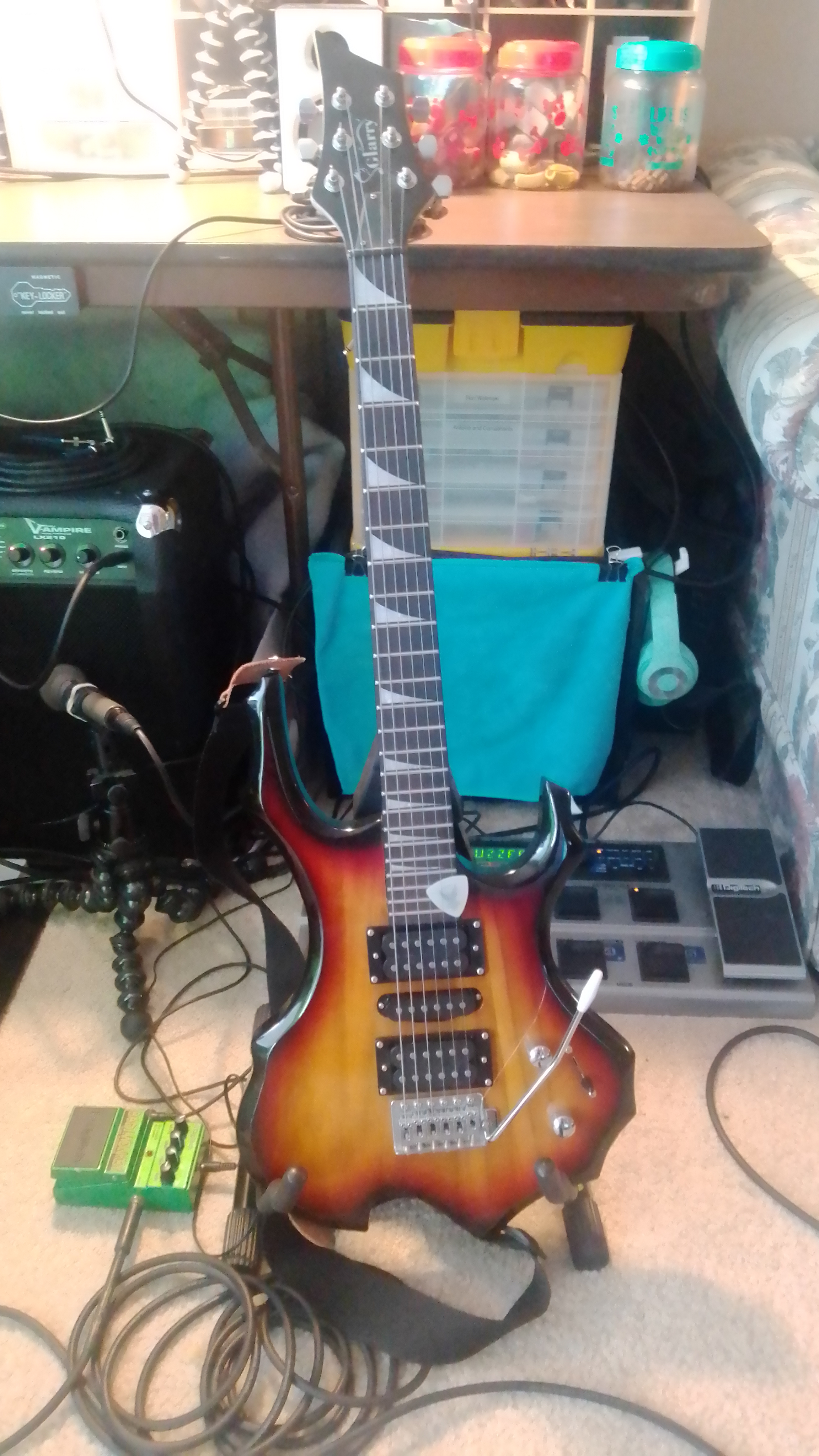 Back to the MIDI controller, I previously used Pro Tools First, using the MIDI USB port on the GNX4 for input. For some reason one day Pro Tools crashed on me and I couldn't get it working again. And it didn't support any VST plugins. I tried uninstalling and re-installing but it keep giving me an error when it started. When I purhased the Alesis V25 it came with a version of Ableton Live 10 Lite. I wanted to mic my amp instead of using the GNX4's MIDI interface, and I was having problems with the generic ASIO. I came across a used M-Audio Fast Track Pro USB Audio Interface on Offerup for $30. Had some trouble with it using ASIO and Windows audio drivers, but after some searching I found a M-Audio driver files and utilities. Using the M-Audio ASIO drivers worked well with ABleton Live. I purchased a Alto DVM5 microphone which was on sale from Guitar Center (and which I had to wait 4 weeks on their "3-5 business days" delivery). And now I have the recently converted ElectroVoice PL76 microphone. Plus the Behringer LX210 amp has a direct out XLR interface. I can either mic the amp or use the amps direct out into the M-Audio. A Tascam TH-200X headset rounds out the equipment. I'm using a Swann M10 speakers system for monitoring. I also have a CAsio CTK451 61 key keyboad that has a MIDI interface which can be connected to the M-Audio Fast Track Pro's MIDI interface.

I have a real nice Behringer V-Ampire LX210 amplifier, a modeling amp. The GNX4 is capable of recording and looping. The only thing is, you have to hit two footswitches together to bring up the recording/looping feature, then hit two foot switches again to return to the effects settings. There is a external foot switch you can get, but they are hard to find, so I just happened to come across the schematics for the foot switch, which is basically three switches, and two diodes. Also, the Behringer Amp has the ability to use a external foot switch to switch the different presets up and down. I had the case for one of those old Sling TV desktop boxes (not to be confused with the streaming app) so I thought why not build my own foot switch for both. Amazon has the switches for pedal boxes so I bought 5 of those, and the diodes.

First step, I installed the switches, three across for the GNX, then on the side two switches vertical. The three GNX switches are Stop, Record and Play. The two Amp switches are Step Up and Step Down 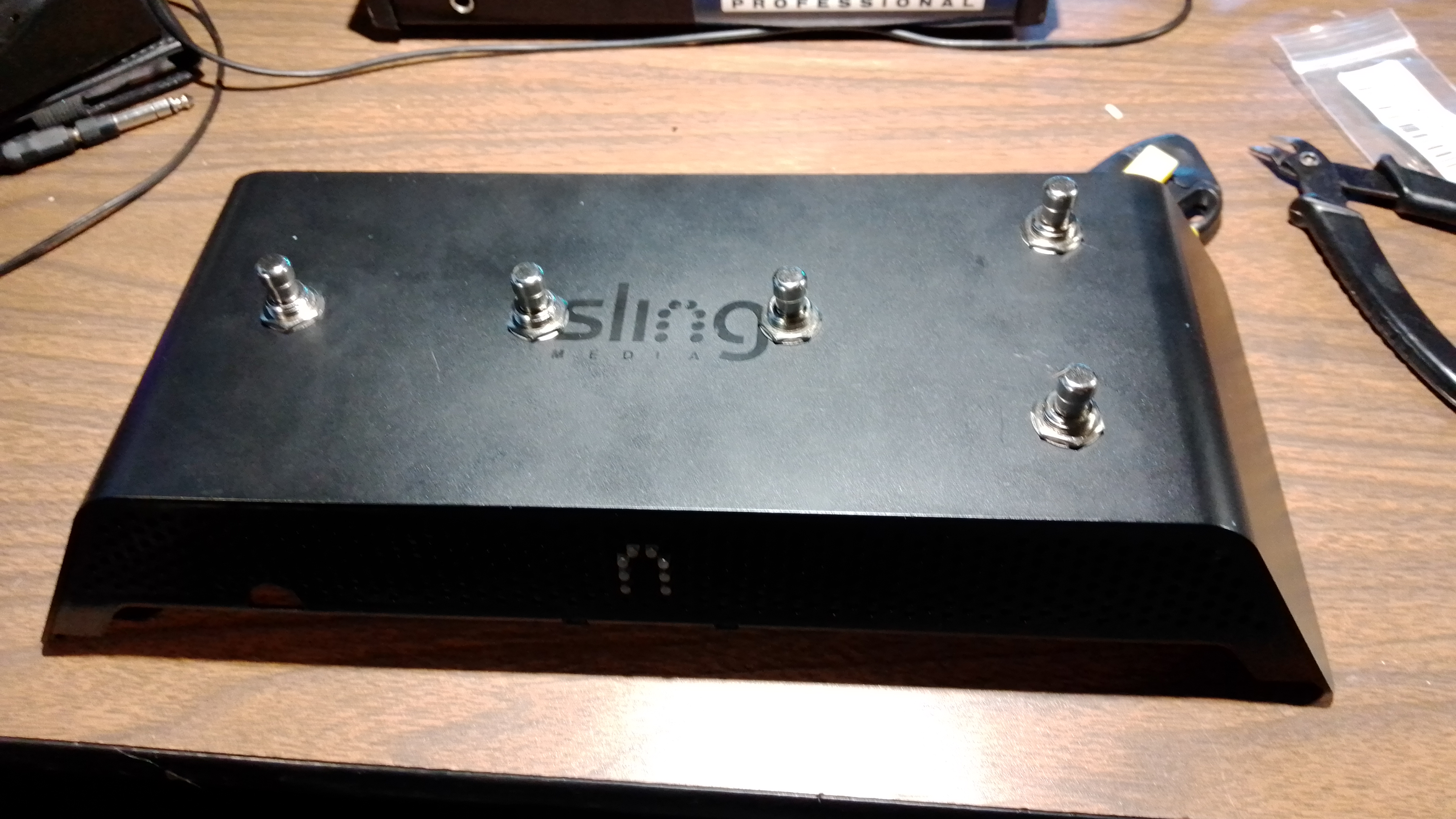 Next is to wire it all up. This is the diagrams for how to wire the GNX switches. The labels are wrong, the Loop Up is Stop the LoopDn is Record and Record is actually Play, or at least that what it turned out to be.

The next step, I wired a disc capacitor across each switch to stop switch bounce. Then I wired all the grounds together, keeping the GNX and the amp switches separate so there's no common ground between them. 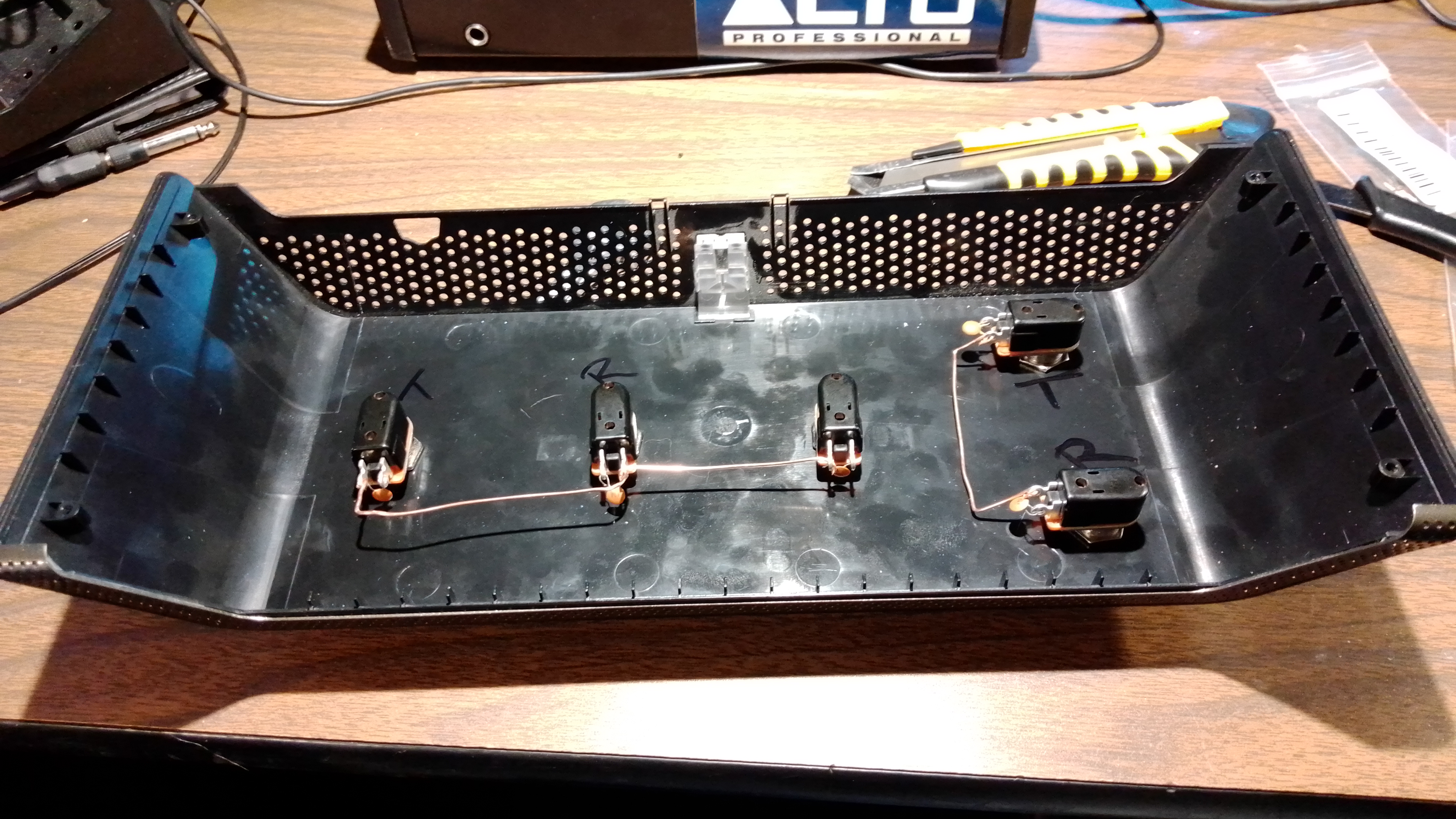 Then I wired the switches. I didn't have any 3-conductor cable laying around, so instead I took a couple of computer power cables and chopped the ends off. It's 3-conductor cable and color coded so that should work, right? The white is the tip, wired to the first switch (looking at the back). Black is the ring and wired to the second switch. I then wired a diode to the same connector as the cable with insulation, then combined them together with a wire going to the third switch. Green is soldered to the ground bar. 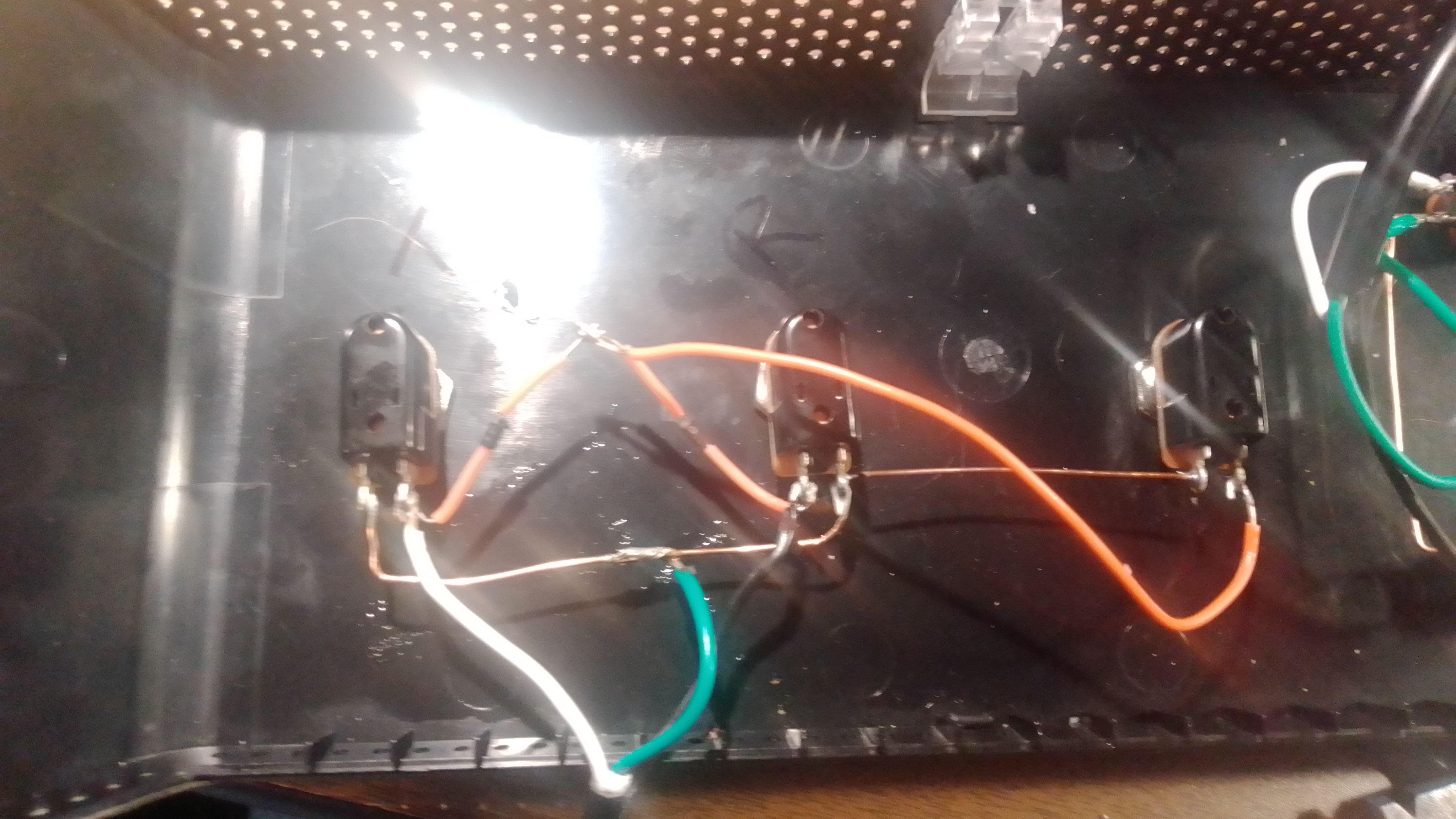 Then on the amp switch side, the white is the tip, which is to step down, and black is ring and that goes to the second switch for step up.

This is it all wired. Before I closed it up I stripped a bit more of the outside cover to give a bit of movement inside, then I put a plastic washer and a zip tie so it won't pull out of the box. 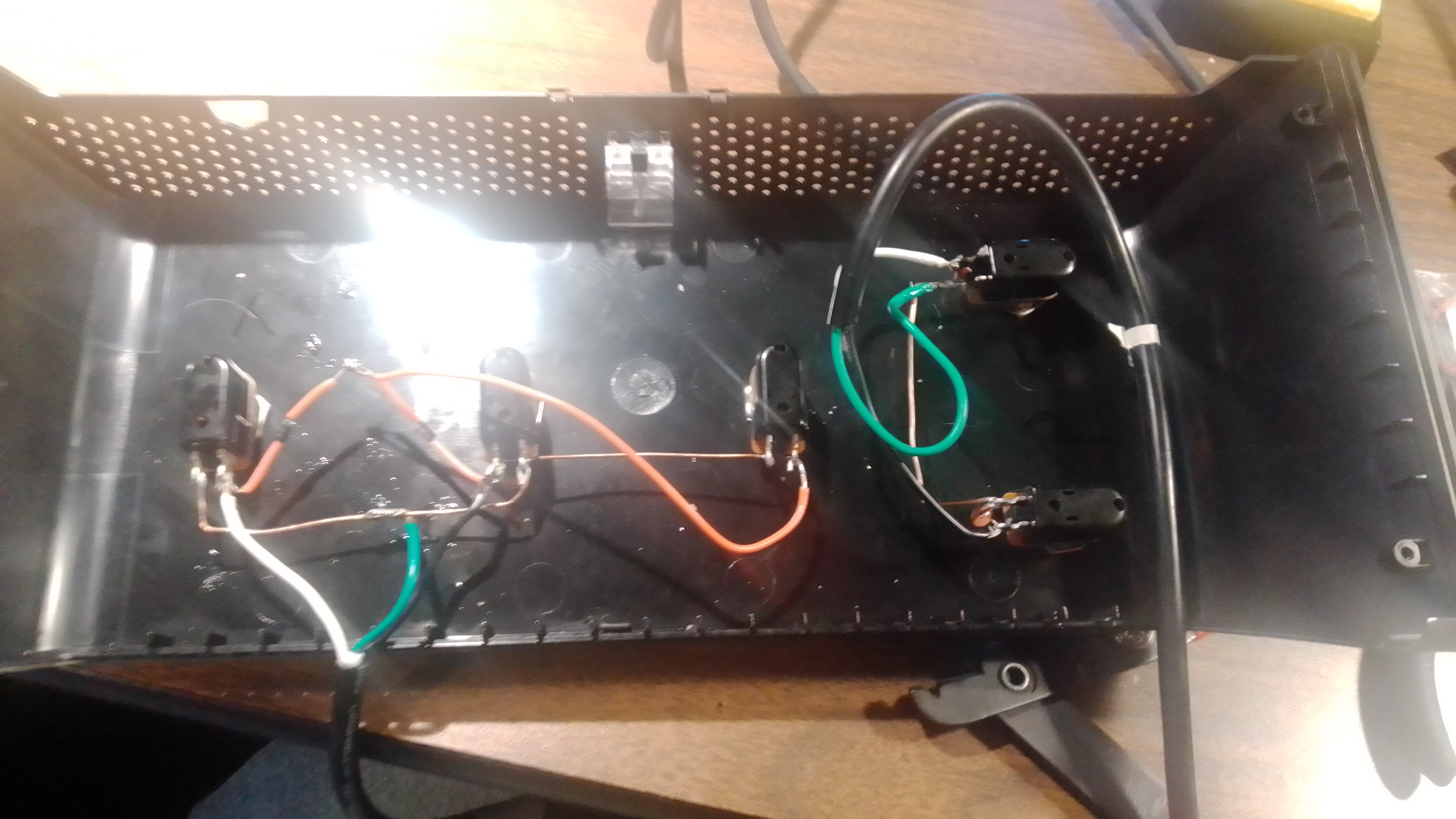 And here's the finished product next to the GNX. It works great, now I have a looper pedal, all I need to do is hit the second Record switch to start the recording, and for looping I then hit the third Play switch to start the loop. The first switch will stop. If you hold down the Stop switch for about 3 seconds this allows you to delete the tracks you have recorded. On the amp switches, if you hold the Down switch for about 3 seconds, it puts the amp into the interna Chromatic Tuner mode. Hit it again to take you out of Tune mode. Pretty slick. 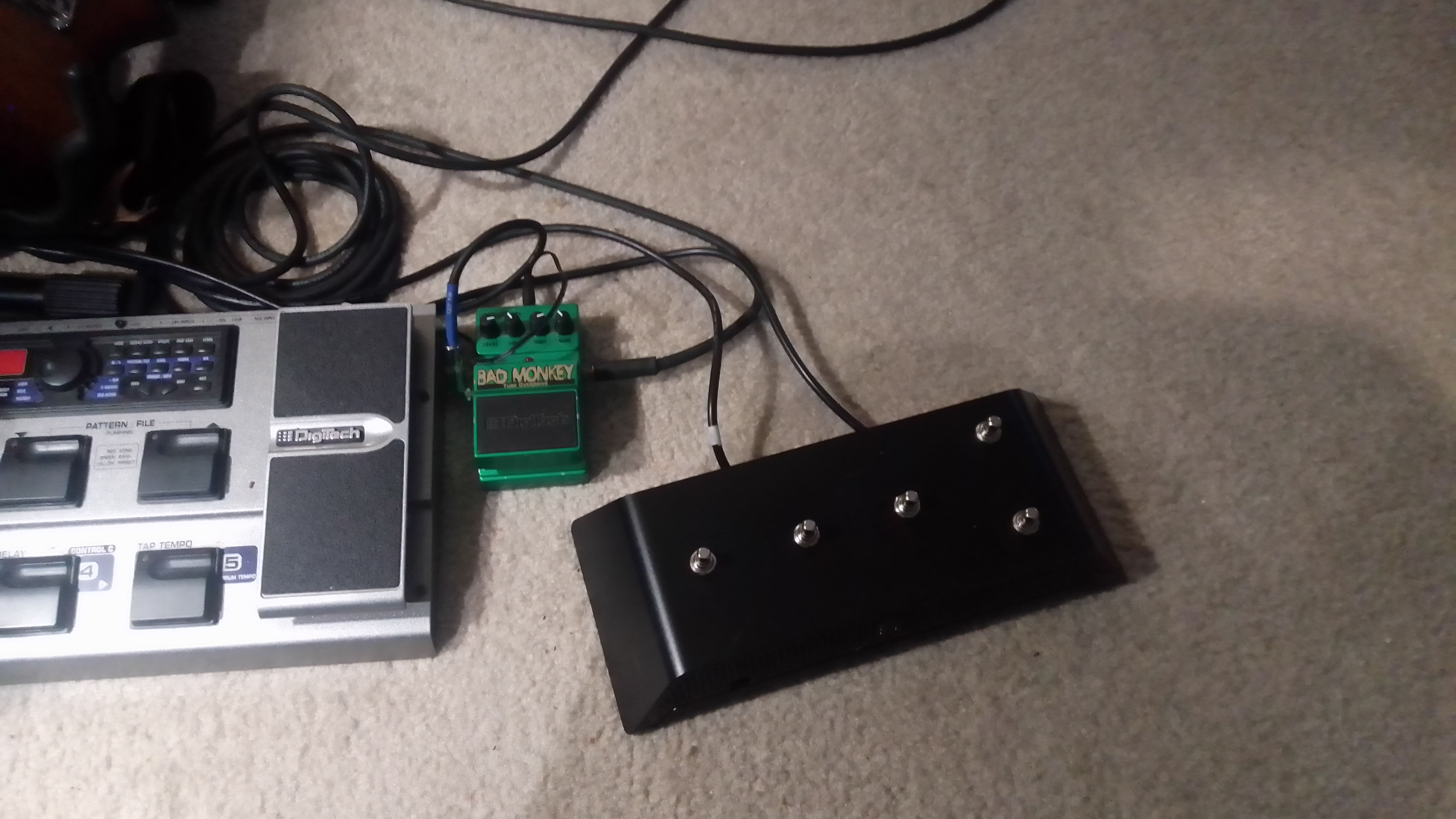 Many many years ago I had purchased a ElectroVoice PL76 Cardioid condenser microphone. Since it was a condenser microphone it needed power. Power was supplied by a 4.5 volt mercury battery. Mercury batteries have been discontinued and replacements are hard to find. There are some alkaline battery replacements, but they really don't last too long. I held on to the microphone though. Then I came across a circuit which converts the microphone to use 48 phantom power instead http://www.uneeda-audio.com/phantom/pl-76mod.htm. All that is needed is two 680K ohm resistors, one 5.1v zener diode (1N5235B), and a 10uf/15v electrolytic capacitor. I didn't use the perf board like the website, I just soldered it all together then applied heat shrink tubing and tape. It all fitted right inside the battery compartment. I found out the on/off switch didn't switch the positive lead but for some strange reason it switched the negative lead. It works great! 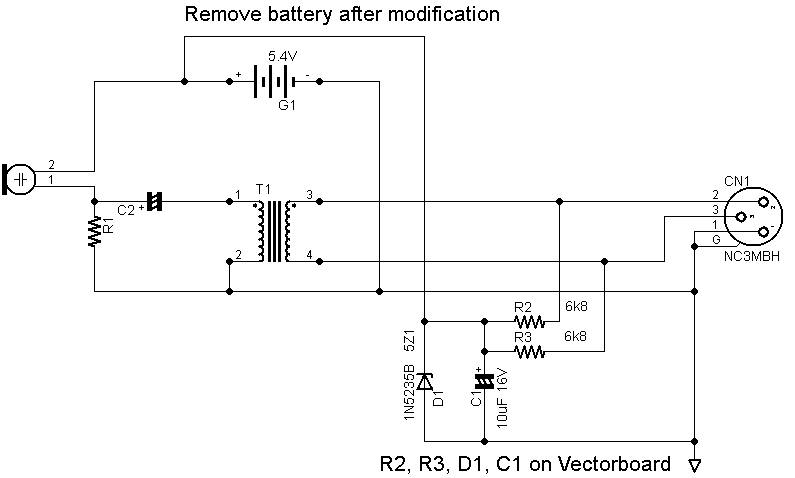 Best puppie in the world, our Prince. Prince is a Basenji, the African bark-less dog. A Basenji is one of the most ancient breed of dogs, originated as a hunting dog in Africa. 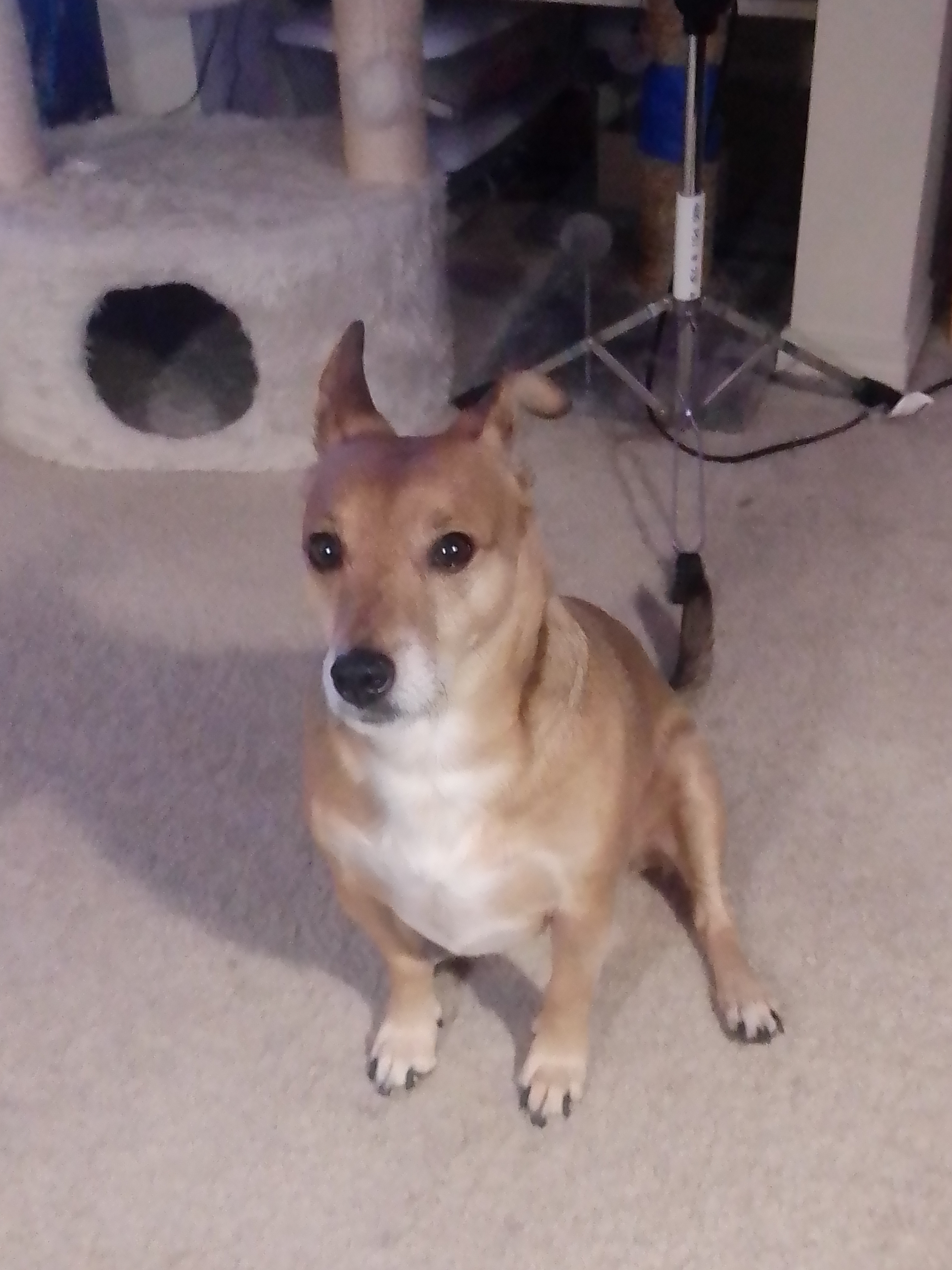 Curly is our 22 lb. Tuxedo cat. He was part of a set with Larry, and Moe. Moe was an all black polydactyl cat. Larry was first, a Blue Russian and Himalayan mix. He sort of looked like the cat in Pet Sematary movie, except long hair. Unfortunately he passed away last year.He was the sweetest cat, however when we left Vancouver we decided that we couldn't move into an apartment with three cats so he found a new home. So now all we have left is Curly.